Massawa, the pearl of the Red Sea

Massawa! The very name conjures up an air of mystique and hidden delights. Massawa! City of islands and the "Pearl of the Red Sea", a city which for centuries has been one of the region's most important ports, and which once, more recently, was the Italian capital of Eritrea. Massawa! City whose present charm has been influenced over past centuries by the Portuguese, the Arabs, the Turks, the Egyptians, the British, the Italians and, most of all, the Eritreans themselves. 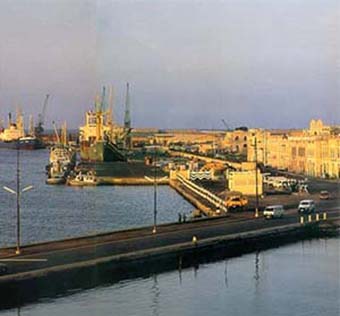 Today, it is the Eritreans who are fully in control, further developing Massawa and its environs, its infrastructure and its future as they stride towards the next millennium.
Massawa's development was initially influenced by the Arabian peninsula. Massawa was turned into a renowned center of intellectual and artistic skills, and this is reflected in the city's architecture. New ideas were implemented over the years by a host of different nationalities, until the British, determined to stamp out the growing French influence in the region - especially after the opening of the Djibouti-Addis Ababa railway - "took" Eritrea from the Egyptians in 1882 and then "gave" the territory to the Italians in 1885. Massawa thus became the headquarters of the embryonic Italian colony, until the permanent capital was created at Asmara in 1897.
To supply their new capital from Massawa, the Italians initially used a cable car - the longest in the world - to winch up provisions from the port on the shore 2,500 metres (8,000 feet) below. As the new capital's population exploded this became impractical, and they installed a railway line, whose construction was beset with engineering difficulties because of the escarpment between the port and the capital, and which finally reached Asmara in 1912. 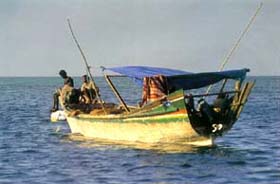 Dhows still ply the sea for fishing
The line was not only a practical solution to the problems of supply but also a matter of national pride. The Italians had watched the British build the "Lunatic Line", a railway running the 1,000 kilometres (600 miles) between Mombasa a nd Lake Victoria, the French had their Livingstone, Stanley, Emin Pasha and others. Italian honour was restored with the completion of the first stage of Asmara railway, which eventually went as far as Agordat, and Massawa flourished as never before.
Sadly, however, this was not to last. During the wars that the have befallen Eritrea since, the railway was dismantled piecemeal by both the British - who also hijacked two dry docks from the port - and the Ethiopians, until all that was left of it was a few ruins of the previously grand railway stations. Before this, and until the 1960s, Massawa was by far the largest, the safest and the most lucrative port on the East African littoral.
Not to be outdone, the Eritreans decided in 1993, the year the country attained total independence, to put Massawa back on the road to success by rebuilding the rail sistem.
Because outside quotations to do the work proved too high, and despite the offer of donor funding, the Eritreans decided to put on a brave face and do the job themselves. Veteran railway workers were re-enlisted to repair the old locomotives and railway stock and to begin relaying the track, starting at Massawa.
After years of backbreaking work and true grit, the railway is now once more almost at the doors of Asmara, a feat which when completed, will be the pride of the nation. It will also be the cause of great celebration in Massawa, for once again the ancient harbour will be a vital conduit between the countries bordering the Mediterranean, the Indian Ocean, the Red Sea and the inland African highlands. 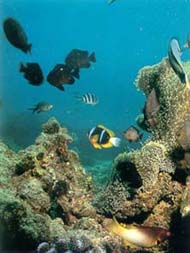 Being on the Red Sea and relatively close to the Equator, Massawa's weather is warm. all year round; the coolest season falls between October and May, which might be the best time to visit. However, because Massawa is a city of islands, the coolness of the sea is never far away, and the better hotels are furnished with fans and air-conditioners. And then, heat is relative. Tourists do not visit Massawa to sit indoors. They are there to get around, to see the history and to visit, fish and dive the islands of the Dahlak archipelago. That is, providing they can tear themselves away from the city itself.
The two intriguing and attractive islands that form Massawa are called Taulud and Massawa, and both are linked to the mainland by causeways. On Taulud Island are a number of government offices, as well as the original governor's palace, built in 1872, the Cathedral of St Mary, and the original Italian-built railway station. On an impressive promontory overlooking the port, with its ships and its dhows, its fishing boats and its yachts, is the resplendent Red Sea Hotel, one among many on both islands and on the beautiful mainland beaches nearby.
Massawa island houses the port, the older part of Massawa, which has ancient coral buildings and arcades that reflect the Turkish influence, as well as even older mosques - the first mosque in Islam was built in Eritrea - which represent the Muslim influence, and other homes built in the Ottoman style of the 18th Century. Here, too, is the old Moorish town, with its splendid shops, arcades, cafes and restaurants offering Eritrean, Arab, exotic and western-style cuisine. Sheik Said island is the closest to the Massawa proper. 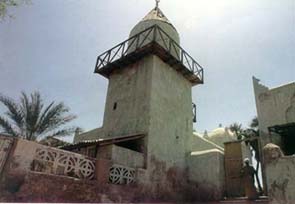 As for getting around the city, the options are numerous. Nowhere is actually too far to walk to but, after a heavy lunch of Arab-style fish served with tandoor bread and washed down with karkadeh - a delicious and refreshing drink which tastes of blackcurrants - a walk back to the hotel for a siesta might be a major effort. Buses, trains and taxis are available or, if renting a car when you arrive seems a bit extravagant, you can always hire a bicycle.
But there is more to Massawa than meets the eye and the stomach along the traditional tourist circuit. Take time to bargain in the souks, the old markets, where almost freely. everything is available at a negotiable price. Go down to the harbour when the fishing boats come in to an excited welcome from the local people, cats and seabirds alike. Study the building of dhows by traditions and methods that have remained unchanged for thousands of years. Walk alone through the wavelets as they beard the most glorious, and less, deserted beaches, which are as good as, if non better then, any in the world. Then sit back and think about the islands and about the sea.

With both of all shapes and size and luxury yachts available for hire by the day or longer, Massawa is the perfect base from which to explore the sea and its environs.
Scattered across the azure waters of the Red Sea like a string of pearls, the more than 350 Eritrean islands remain one of the great unspoilt areas of the world. More than 200 of them, of which only about 10 are inhabited, form what is known as the Dahlak archipelago, which is a paradise for yachting, fishing, snorkelling, scuba-diving and simply tramping the islands or strolling their beautiful beaches. The underwater life around the islands is a true marine wonderland; about 150 species of fish seen here are not to be found anywhere else in the world. Even on the islands themselves, there are probably species of plants still waiting to be identified by science. The only possible problem with setting out from Massawa to explore the Dahlaks is that you will never want to return. Ever.
With its easy access from the outside world by road, sea, air, Massawa today is the ideal sea side destination for anybody wants simply to jump off the edge of this rat-race, fast-living world of ours and land in paradise, where tomorrow is just another day - a place where stress is a foreign word and a city where endless smiles are offered freely. With its rich mix of friendly peoples and nationalities, and its relaxed atmosphere, natural warmth and total charm, Massawa is the springboard for a holiday you will never forget.